How do I troubleshoot QuickBooks Desktop and the Web Connector?

If the time stamp inside JobNimbus=>Settings=>QuickBooks is not updating regularly, there may be an issue with the web connector:

To launch the web connector:

To run the sync manually:

If the QBWC is not working. Try the following steps.

Here are some of the common errors we see on the web connector when syncing to QuickBooks Desktop and how to troubleshoot them:

An error will display on the web connector in red next to ‘last result’. Click on the ‘Click for more information’ to determine the cause of the error, listed under the Description: 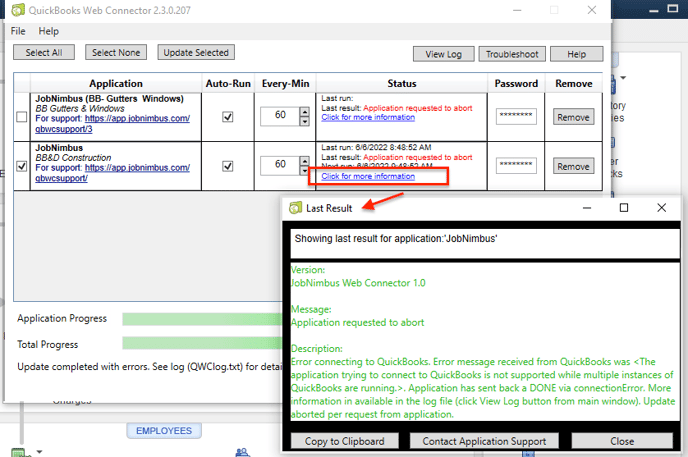 Explanation: This error can appear when trying to re-add the JobNimbus QWC file to the web connector that has previously contained the application.

Error: A QuickBooks company data file is already open and it is different from the one requested or there are multiple company files open

Explanation: This means the wrong QuickBooks account is open for the Web connector instance that you are running or that you have multiple companies open at once.

Another possibility is that the file path has changed:


Error- Company File is Locked by another client

Error -  There was a temporary network issue while syncing. This issue should automatically resolve during the next sync cycle.

Explanation: This error is typically caused by the internet connection being interrupted during the sync, or being too slow to handle the amount of data trying to transfer.

Error: This application is unable to log into this QuickBooks company data file automatically. The QuickBooks administrator must grant permission for an automatic login through the Integrated Application preferences.

Explanation: The permissions for the web connector have been removed from JobNimbus

Try restarting the computer and Quickbooks. If that doesn't resolve it, you would need to reach Quickbooks Desktop and see if they can fix the software. They may have to re-install the Web Connector. This typically will escalate to a Tier 2 technician.

The web connector is likely timing out. It could either be Quickbooks is being slow or the HTTP connection is slow. There is a two-minute hard-coded timeout for each HTTP response. If there is a lot of data, you may way want to make some data inactive so it is more manageable for the web connector. Check your internet is running well, a slow network with a lot of data to transfer will result in timeouts.

Can I have the web connector set-up on multiple computers?
If you set up the Web Connector on another computer with the same .qwc file and password it will affect the sync on the first computer. The sync on the first computer will stop functioning appropriately so this isn't advised. The best way to sync is to have one admin in the company file with one web connector and use that on auto-run.